What began in October of 2015 with three Canadians arriving in Zambia has been completed and is now in full use. The generous support of Canadian donors has enabled Faith’s Orphans Fund to build a school at the Lungwa Centre where the children there can now receive the education to change their futures and impact their community.

The nearest school for the children of Lungwa had been more than 16 km away, too far for children to walk at anytime let alone during the rainy season when paths and the road would be awash.  Education previously consisted of brief lessons by non-teachers in a tiny hut.

The construction plans for Lungwa consisted of a school building with three large classrooms and supply storage room, a small four-room building to house the teachers, two separate latrines for the students plus all the required desks and chairs.  Before construction of the school could begin however, a well had to be drilled to provide the water to mix with cement to make concrete.

The well that provided the water required for construction also gave the entire community a sustained source for safe clean water and it has become the central meeting place for the community.  The well was made possible by a generous group of people in memory of a special teenager from Frankford Ontario and a plaque embedded in a concrete memorial now stands by the well as a permanent tribute. 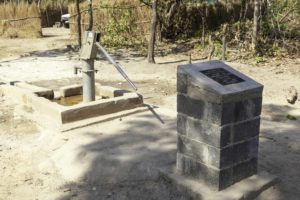 The work on the school was carried out in three phases with the assistance of four students from our Skills Training Centre and the entire Lungwa community, including the children who contributed by carrying materials like heavy concrete blocks to the building site. Before the school was finished and before the desks and chairs arrived, the children were being taught in the classrooms…and today, 176 children attend the classes held in this new school.

Thank you for your continued support of Faith’s Orphans Fund. Together we are making a difference in the lives of these children and giving them a brighter tomorrow.